The JLPT Is a Much Bigger Deal than I’d Thought

Have you heard of the Japanese Language Proficiency Test, or JLPT? If you’ve found your way to this page, then you probably know that it’s a standardized test to assess the skills of people learning Japanese as a second language. It goes without saying that compared to English, the number of people worldwide selecting Japanese as their foreign language to study is considerably smaller. Back when I first took the JLPT in 2007, there were over 500,000 total test-takers that year. That may seem like a lot, but not so many in comparison to the 1,636,000 examinees that same year who took the TOEIC (Test of English for International Communication), only one of the major tests for English learners.

However, this summer I took the JLPT for the first time in 11 years, and when I did, I noticed that there were a lot more test-takers than the last time. I also felt really old since most of the other folks seemed to be college age (full disclosure: I turn 40 in a few weeks). My test venue was in Kyoto, where I live. In addition to its rich culture and history, the city is also home to many universities, along with a good deal of international students.

In fact, the number of students coming to attend college in Japan has risen significantly since 2007, when there were 118,498. According to the most recent statistics from the Japan Student Services Organization (JASSO), there were 298,980 in 2018, marking an increase of 152%. Not surprisingly, the number of JLPT examinees over that same time frame has gone up quite a bit, to over a million, or about twice as many as in 2007.

Caption: The Kamogawa River, where college students commuting on bicycles or practicing musical instruments are a common sight.

So yeah, there’s obviously a lot more interest than before in learning Japanese and proving that one has the skills. It’s not hard to guess why, what with Japan’s demographic woes turning the wealthy country into a “super-aging society,” thus offering foreign speakers of Japanese new job opportunities. Japan, which was the second-largest economy by GDP until China overtook it at the end of 2010, has a growing number of elderly people and a shrinking number of young folks, which over time will gradually put a heavier tax burden on the working population as it tries to pay for the expanding cost of entitlements to the non-working segment.

The Japanese government and business sector have been endeavoring to implement reforms to mitigate the infamous workaholic lifestyle of the Japanese “salaryman,” presumably so they can engage in a bit more procreation with their wives. Efforts have also been underway to provide better access to daycare centers so that more women can enter the workforce, thus contributing to the economy while also having more children.

The results have been mixed. Japan has also been hoping robotics and automation can help make up for the labor crunch.

One obvious but politically touchy solution would be to allow more immigration, and in recent years there are indeed more foreign residents as the Japanese political establishment accepts this inevitable policy shift.

Okay, now that we have the extensive background out of the way, let me get to the point of this post. A few days ago on LinkedIn, where I’m a pretty passive user who’s lucky to get a couple views of my profile in a week, I posted the following: 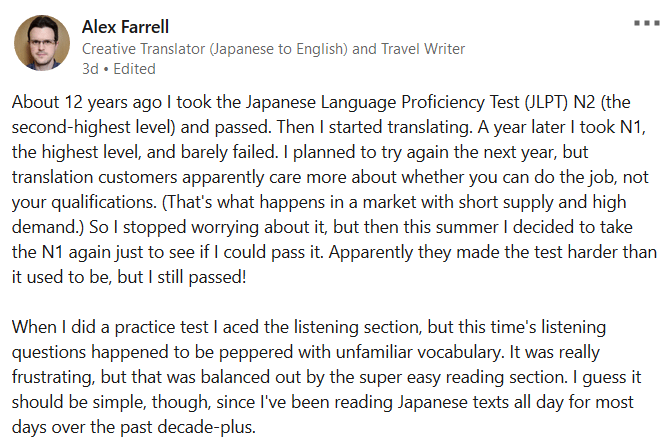 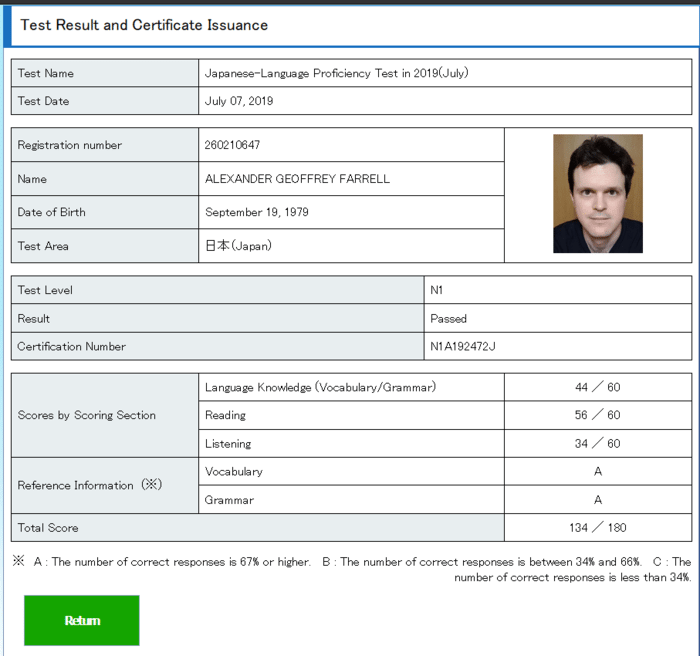 Now, I don’t think this counts as “viral” since I started from a pretty low base, but it did tell me something: the JLPT is a much bigger deal than I’d thought!

Which got me thinking… As a professional translator and occasional travel writer who’s fluent (enough) in Japanese, and as someone who enjoys teaching and sharing knowledge, perhaps there’s more of an audience out there than I’d figured who would appreciate the insights I’ve gained from my experience. Hence this blog, hence my new Twitter account, hence my renewed attention toward LinkedIn, etc., etc.

All this leads me to my next topic: “Why Learn a Foreign Language?”. It can be a daunting challenge, but more and more people are taking it on, and not just in Japanese. What’s their motivation? And could you, too, benefit from speaking another tongue? Click below if you’re curious to learn more.

Writing is an Art, Not a Science

I met a particularly stubborn fellow one day at a translation workshop in Tokyo. The topic was about how to translate unnecessarily convoluted Japanese sentences into English. There were around 50 participants, and after the initial... Continue →