Filling the Hours as a Freelancer in an Economic Downturn, Part 1: Investing in Your Business

The coronavirus has turned the world on its head and thrown businesses of all stripes and colors into chaos. My translation practice has also taken a hit, though not a fatal one. I would say I’m operating at about 80% capacity. I was expecting a sustained drop of around 50% for two to three months, which I experienced after the 2011 Great East Japan Earthquake and the Japanese consumption tax hike of 2014, but for now the impact hasn’t been so great.

Even so, my calendar is not as packed as usual. You would think this would give me more time to write this blog, but I haven’t updated in over a month. Since the pandemic spread like wildfire across the world, accompanied by a steady stream of jaw-dropping news coverage, I have felt a lethargy that has prevented me from putting out the extra effort to do things like writing or exercising. The travel industry is in the dumps, so I have zero motivation to update my visual travelog on Instagram. Meanwhile, I’m over halfway to meeting my target body weight since I began dieting in December, but my weight has been pretty much flat for the past month.

I have been productive in other ways, though, as the novel coronavirus has intensified my concerns over my financial well-being, and I have been channeling those worries into a focus on finding ways to be more productive and make my business even stronger when the economy eventually does come out of its coma. I’d like to share what I’ve been doing, as well as some ideas that fellow freelancers in translation and other fields might be interested in.

My financial situation isn’t dire (yet), so I decided to spend some of my available funds on productivity solutions.

The first came when I discovered that Personal Dictionary (PDIC), an offline dictionary interface with Eijiro and other dictionaries loaded (available here), allows you to display results from multiple dictionaries in one window. I’ve been using this software for years, and I’d never even noticed that! I had been wasting so many keystrokes switching between tabs.

That’s when I decided to load up on some dictionaries and create a couple of my own from some glossaries I’d been building and databases available for free online (personal names, readings for Japanese addresses, legal terminology provided by the Ministry of Justice, etc.). One dictionary I got with a business focus is handy for finding snappy ways to say things that don’t translate well literally, but I think it’s a bit overpriced. 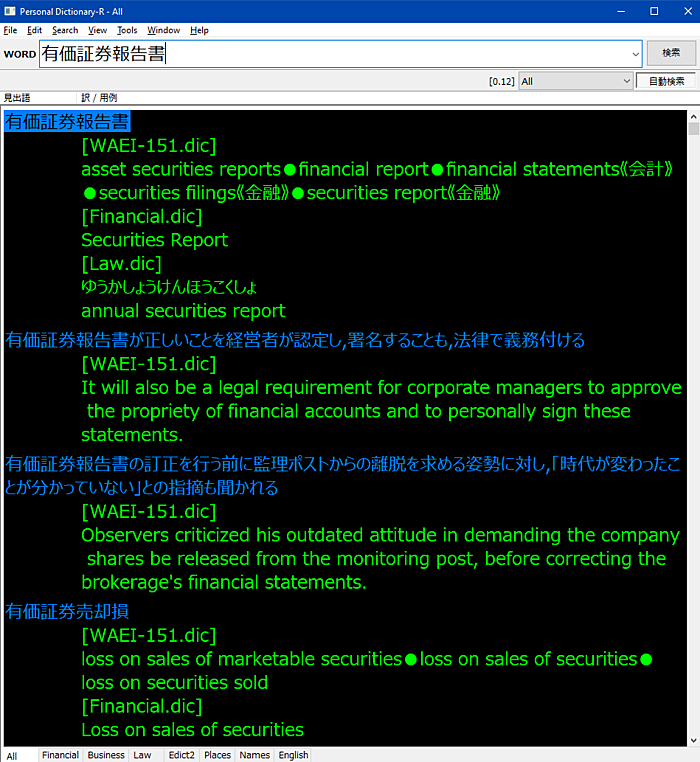 You can see the tabs for the different dictionaries along the bottom of the screen. The one on the far left called “All” combines all the dictionaries into one. In this example, I’ve searched for 有価証券報告書. There’s a setting that allows you to display the name of the dictionary the entries come from. If I just want to focus on a certain field, however, such as finance or law, then I select the appropriate tab to the right.

I also installed another offline dictionary interface, EBWin4, but it’s slower than PDIC and is prone to crashing. Plus, you can only display results from a single dictionary at a time. However, one of my new dictionaries packed with life science and medical terminology simply won’t work with PDIC, so I use EBWin4 only when those kinds of topics come up in my work. Here’s what it looks like after tweaking the appearance to make it darker, something I love to do: 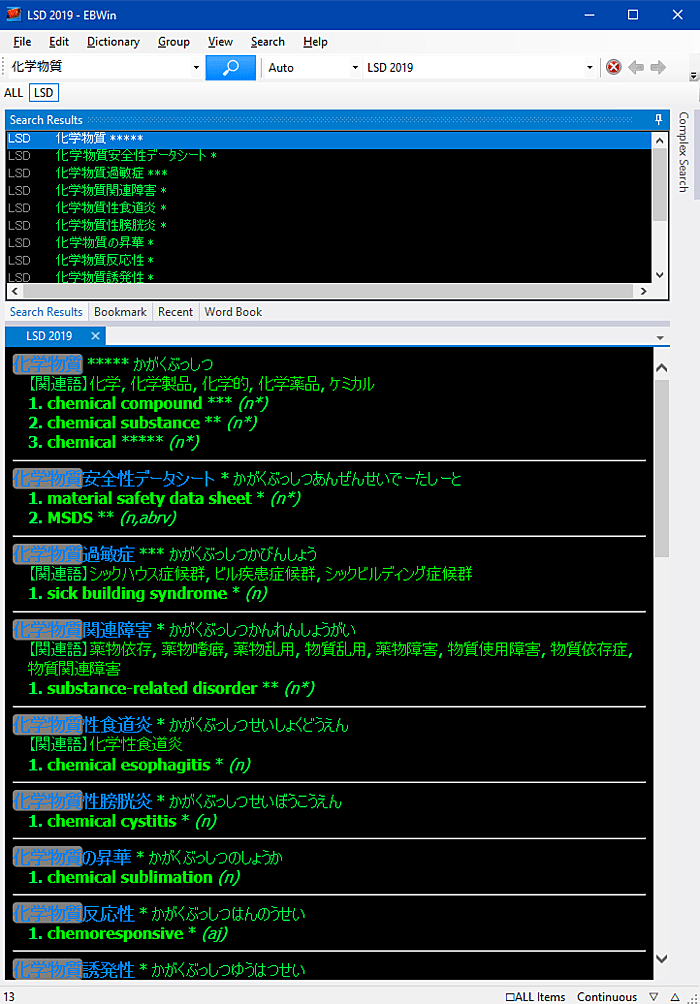 So yeah, I played around with my dictionaries a bunch on some slow days. What I want next is a database of readings for geographical locations in Japan (mountains, rivers, etc.) to add to my arsenal. That would be a huge help for tourism-related work, though I’m not in a rush since demand for those translations seems to have dropped off a cliff for the time being…

(UPDATE: I found what I was looking for: Gazetteer of Japan 2007. It’s over 10 years old, but the names of geographical features don’t change too often, so no problem. The same page I linked to also has an update from 2018.)

Another piece of software, which I’m trialing at the moment, is memoQ. This is a pricey product, though I think I’ll go ahead and purchase it after my trial ends because my computer-assisted translation (CAT) tool of choice for the past decade, Felix, is gradually growing buggier over time because it is no longer supported by the developer. Another thing besides the price that turns me off about memoQ is that even on my fairly powerful computer, it feels clunky and slow compared to Felix, which is lightweight and super fast. Also, you can’t use your memoQ resources on multiple computers via a file-sharing app like Dropbox. I find that incredibly stupid. Plus, there’s no dark theme.

However, memoQ does have lots of features that make it much easier to keep terminology consistent, plus it makes translating PowerPoint files overstuffed with unnecessary text boxes a hell of a lot easier to handle, so overall I think it’s a plus. I’m pretty sure I’m gonna end up purchasing a perpetual individual license…for $770. Ouch!

I found a less expensive way to boost productivity in hardware by purchasing a second monitor. I got a 23.8" Iiyama model that was 16,980 yen at the time, though as of this writing I see it’s now up to 19,800 yen. With more people working at home, it seems monitor sales have jumped up, and this was the only one I liked that would ship immediately.

Anyway, having an extra screen is so awesome! I don’t know why I didn’t do this a long, long time ago. Check it out:

Now the fingers on my left hand can take a well-deserved break from furiously hitting “Alt+Tab” over and over. It depends on what combination of apps I’m using at any given time, but usually I’ll translate on the middle screen, have reference information on the left side, and then baseball or football playing on the TV to my right for a pleasant distraction that makes my workday more enjoyable. (With sports dead at the moment, I’m settling for classic baseball games.)

Another area where I’ve wanted to brush up is using a more consistent writing style. I thought about developing my own style guide, but then I realized there are already great resources out there. Here are the books I bought: the “Japan Style Sheet” (also available for free in a digital format) for matters specific to Japan, “The Associated Press Stylebook 2019” for journalistic content, and “The Chicago Manual of Style, Seventeenth Edition” for other prose (also available online). Even with an extra monitor, it’s nice to have a physical book whose pages I can quickly flip through, though digital editions have an advantage in that you can look up information pretty fast with the search function.

That pretty much sums up what I’ve been up to in terms of investing in productivity in anticipation of a turnaround, whenever that’ll be. I’ve also been investing in cheap American stocks! I am by no means an expert on investing, so I won’t share any details on that here. I’ll just say that I’m not investing more than I can stand to lose. Also, Investopedia and The Wall Street Journal are great resources for learning about investing.

Other things you might want to consider doing during the downturn is studying up on your trade if you plan to stick with it for the long term. You could also acquire some new skills in an area like computer programming. In my various attempts to hedge against potential human translator obsolescence, I tried learning to code a year ago, but I found it wasn’t for me.

You could also write a blog!

Anyway, stay safe, healthy, and alive everybody. For my next article, whenever I get around to it, I plan to write about investing in your happiness during these troubled times. I hope you’ll find it useful.

UPDATE: I actually went ahead and wrote it the next day. You can read it here.

Did you know there’s this amazing up-and-coming technology called “artificial intelligence,” apparently abbreviated as “AI,” which is going to take everyone’s job once the algorithms evolve into an artificial general intelligence, and... Continue →